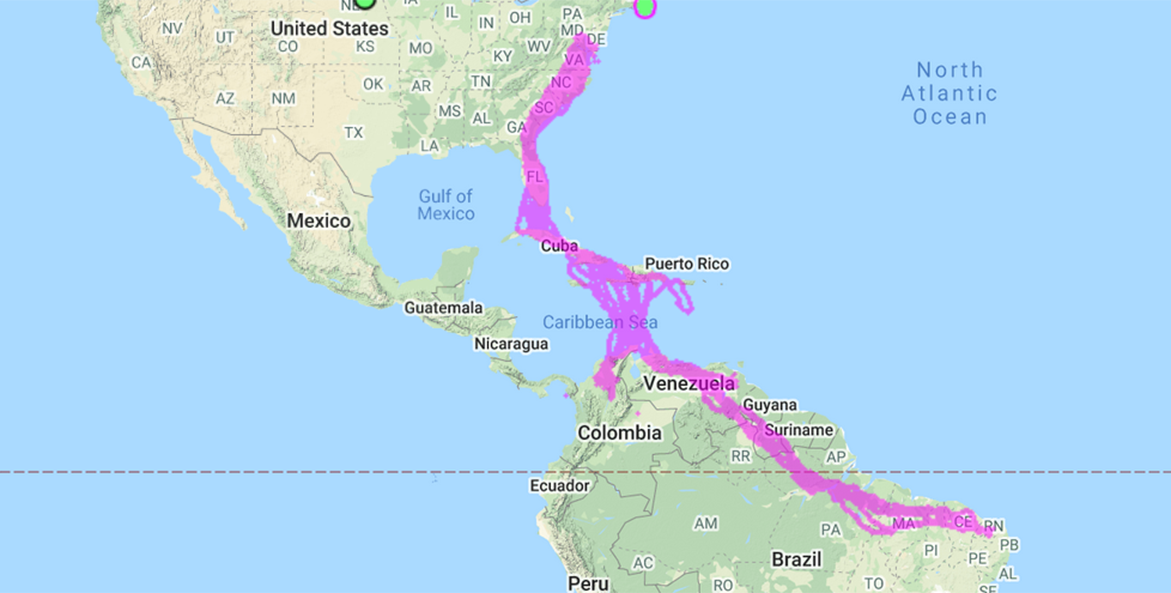 What is an Osprey?

General description: An Osprey is a large bird with a length of 22-25 inches, a wingspan of 4.5-6 feet, and a weight of approximately four pounds. The Osprey has a dark brown back and a white belly, as well as a white head, which features a dark stripe running from its yellow eyes to the back of its head. Female Ospreys are slightly larger than males and may sport a dark speckled necklace. Ospreys are seen in the Chesapeake Bay area from spring through fall, but are rare in the winter. North American Ospreys winter in Florida, the Caribbean, on the Gulf Coast, and in South America.

Eating behavior: The Osprey dines almost exclusively on live fish, often catching its meals by hovering over the water at an altitude of 50 to 200 feet, then diving feet first into the water to catch its prey. The Osprey’s feet are uniquely adapted to “air fishing.” Each Osprey foot has a reversible front toe, as well as barbs, called spicules, which help it hold onto a slippery fish in flight. Normally, an Osprey will aerodynamically position a fish headfirst in its talons before it returns to the nest.

Nesting behavior: Like Bald Eagles, Ospreys often reuse old nests, adding new material to them each season. Ospreys prefer nests near water, especially in large trees, but will also nest on artificial platforms. Ospreys three years or older usually mate for life, and their spring courtship begins a five-month period when they raise their young. By the third week of April, the female Osprey usually lays three to four eggs, 1 -2 days apart, each about the size of a large chicken egg with color being white to light brown splashed with varying shades of red, brown, and gray blotches. The eggs will hatch in the same sequence as they were laid, in about 4 to 5 weeks time. The female will stay on the nest the majority of the time, with the male giving her an occasional break when she leaves to hunt for food. If the food is scarce, the oldest chick is the most likely to survive as it will outcompete its siblings and may even push them out of the nest to gain an advantage. Within 30 days of hatching the young birds will be 70-75% of their adult weight. The chicks will fledge about 55 days after hatching but will remain at the nest as home base until they migrate in September. The birds fledge when the parents slowly stop bringing food to the nest, in which case the chicks will stand on the sides of the nest flapping their wings and jumping around looking for food. A gust of wind or a misstep and they are in a free fall, forcing them to take their first flight; it is then that they begin to hunt for food on their own. The older birds migrate first and the young stay for a week or more to gather strength for the trip.

Threats: Like many birds of prey, the Osprey suffered during the 60s and 70s due to the rampant use of DDT and other dangerous pesticides. Research done at Maryland’s Patuxent Research Refuge was used in Rachel Carson’s classic “Silent Spring,” and alerted citizens, scientists, and politicians to the fact that DDT was harming bird populations. Patuxent scientists discovered that DDT was working its way up the food chain and thinning the eggshells of raptors. Fortunately, DDT was banned in the U.S. in 1972, and thanks to the hard work of many dedicated people, birds of prey are beginning to rebound.

We’ve all been watching the return of our Ospreys and during the past decade have experienced the thrill of seeing them expand their nesting range into Michigan’s southern Lower Peninsula. Their recovery since the era of DDT is very gratifying. What makes it more exciting is that this expansion was facilitated by the 1998 – 2007 hacking project. The goal of the Reintroduction Program was 30 nesting pairs by 2020. It’s a job well done as we achieved that number and more in 2010.

As we continue to monitor the health of the Osprey population throughout the state we are aware that data covering areas of special interest are missing. In Michigan we lack knowledge as to the routes our birds take during migration, their arrival and departure dates, and more. In order to gather this information we need to employ the aid of satellite and gsm telemetry. Information obtained from this technology can also be used to aid in the conservation of the Osprey. Previous studies indicate threats to their survival at aquaculture facilities in Colombia and at stop over sites within the Dominican Republic, and likely at other places. Do Michigan Ospreys visit these dangerous areas? Answers to this question and many more can be obtained from these high-tech devices and cannot be gleaned from banding alone.

The goals of this study using satellite telemetry are as follows:
• Track migratory paths of Michigan Ospreys,
• Determine arrival/departure dates,
• Track foraging habits,
• Identify stopover sites and feeding grounds during migration,
• Track movements on the wintering grounds,
• Locate dangerous areas to their survival,
• Fill in the gap for regional migratory data.
• Educational outreach to schools and the public
• Conservation of habitat

The positions of our satellite-tagged Osprey are provided by Movebank and we have plotted each of them below in Google Maps.

Each Osprey has a name that corresponds to the tracking ID, the location where they were tagged, and then a name that has been given to them.

Four Ospreys are being outfitted with a transmitter in the summer of 2017.
The map below will show each birds location with a corresponding color.

Use the calendar at the top of the map to help navigate through the path of the Osprey. Click on a date and a dot representing each bird appears on the map for that date. Click on that dot, and more detailed information will appear. Drag the dot along the lines to see their path.

Here are some handy tips on how to navigate and interact with the map in order to follow and enjoy the adventures of each Michigan Osprey.

1) Check the calendar at the top of the map, and click on a date. A dot representing each bird appears on the map for that date. Click on that dot, and a bubble pops up with time and location details.

2) Drag the dot back and forth along the migration path until you reach a spot where you want to stop. Click on the dot and time/location details again appear.

3) You can also drag the “hand” along the path, and when a pointer finger appears, click on that spot to learn when the youngster was tracked in that location.

4) Zooming in on the map provides a visual of the area the bird is visiting. To enhance the info, click on “Satellite” in the upper right corner of the map and then hit “Labels”. City/street names, etc.magically appear on the map! A complete zoom in provides the details of the location…the river, trees, etc. that the bird visited. It’s almost like having a drone spying on our birds! What fun!!

Movebank is an international online database for animal movement and was created to help researchers share and analyze their animal tracking data.

Information about animal movement can tell researchers not only about the behavior of individual species, but also about how animals interact with the environment and respond to changes such as habitat destruction and climate change.

After biologists go out to the field to catch, tag, and release animals, the GPS tags attached to these animals begin to record animal locations and send the information via satellite or GSM networks.

This information can be sent directly to the researcher by e-mail or text message, and can be automatically transferred to their own study in Movebank. Data might be sent every minute, every hour, or a few times a day, depending on the tag and on the purposes of the study.

Have you seen an Osprey? Where and when did you see it? What kind of behavior did you witness?

Below is an observation guide provided by Wildlife Biologist, Sergej Postupalsky, who has studied Michigan Ospreys for 50+ years. Feel free to use this as your guide.

In individual pairs the timing of breeding tends to be quite consistent from year to year. A new pair, nesting for the first time, however, may be late by as much as 3-4 weeks. The same may happen if a mate change has occurred and there is a new (young) female.

To determine if a nest has been repaired in the current nesting season look for new sticks on top – sticks with fresh breaks. This becomes important when no incubating adult is seen. Incubating adults may sit very low in the nest so that only the top of the head may be visible. Sometimes not even that is visible. The trick is to whistle, clap one’s hands or honk the car horn. The incubating bird’s head will pop up briefly to look around.
Later, if adults are present and defending, there is a high probability that young are in the nest. To see them may take some time. Ospreys are very attentive and guard the young; one – usually the female – is almost always present. When she becomes aware of an approaching intruder, she will vocalize and the young – even large ones as big as she – will flatten low in the nest and out of sight. Therefore, it is best to watch through a scope from a distance or try to sneak up closer behind some cover. It may take some time before the young come into view. I’ve waited as long as an hour or more. A youngster may stretch a wing, or rise up to defecate. The best one can hope for is that the male will come in with a fish, in which case all of the young are likely to stand up – or at least raise their heads. One other way to tell if young are present is to look around the base of the tree, snag or platform for accumulated fecal matter. Much “whitewash”, including some that is fresh, will indicate the presence of young, but you won’t be able to see them until you’ve put some distance between you and the nest and the adult has quieted down and relaxed (in a sense sounded the “all clear” signal).

Adults can often be sexed in the field. The female is slightly larger than the male, usually noticeable when they are standing or perched side-by-side. The female has heavier and darker brown blotching on her chest. As a rule, the male has much less, and if present, the spots are fewer, smaller and paler.
This works in about 9 out of 10 cases. Occasionally, one encounters a pair with the female’s spotting is below average and the male’s is above average, all of which will make them hard to tell apart. Downy young have a prominent white dorsal stripe. The stripe becomes covered when the chick develops body feathers at about 4 weeks of age. Nestlings can thus be aged as being <4 or >4 weeks old. In feathered young and fledglings the dark brown body feathers are each edged with salmon or whitish color, giving the bird a spotted appearance. This and some tan feathers on the back of the head help to tell a fledgling from an adult – in reasonably good light, at least. Also, about fledging time eye color changes from brown to orange (but this varies between individuals). Young fledge – starting to fly – between 7 and 8 weeks of age; males a few days earlier than the larger, heavier females. This knowledge may help one judge if a missing young may have already fledged and left the nest. Fledglings tend to return to the nest at feeding time when an adult comes in with food. In such instances they may materialize out of nowhere.